Nothing really changes year to year with this award show shit. The red carpet is as straight faced as a World Series Poker game. The Red Carpet Ambassadors or whatever the hell the networks are calling those reporters these days, are telling all the women they look gorgeous. Hint, they don’t ALL look gorgeous. Yes most do, but there’s a worst dressed list for a reason and if you wear something too plain, wrong shaped, or bad pattern, you will find yourself on it despite what Seacrest said.

The opening monologue is always hit or miss, but this year Ellen is hosting. She actually has a cult like following and people will laugh at pretty much she says. The show itself filled with straight weird shit. Forced teleprompter jokes were smashed between Ellen popping up (literally) all over the place. She is rather infectious, isn’t she? I never watch her show and I’m starting to think I should. Am I becoming an Ellen fan? Jesus.

Anyways, most acceptance speeches are pretty cute and done with a heavy accent. We’re watching people’s dreams come true so it’s hard to be that critical. The show continues like the past five years of Oscar shows… a video reel of Matthew, Jennifer, Julia, Myers, Johnny T, Emma, Amy, Tom, Martin…. you know, the crew. Of course a few randoms were thrown in and a few underdog nominations, but this isn’t March Madness and at the Oscars, there’s rarely a successful Cinderella Story.

Ellen takes a selfie, her and I have similar feelings on this topic.

I don’t know if the weirdest part of the show is Leto’s manbre (man-ombre) or the random creepy girl at the piano. They should probably bring Kanye back.

Meryl and Ellen gather a crowd including Roberts, Spacey, Cooper, Pitt, Lawrence, Jolie and a bunch of  other celebrities for a group selfie. This is the closest selfie to rival the Obama/Nye/deGrasse Tyson that Hollywood can put together and will probably be better received. God help our world. 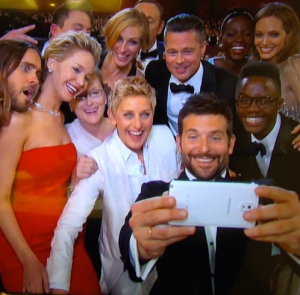 Despite not being a true Cinderella Story because no one was able to overlook Lupita Nyong’s fantastic performance in 12 Years A Slave, she did resemble my favourite Disney princess when she glided across the stage to accept her award. She did look genuinely ecstatic when her name was called and in my opinion delivered one of the best acceptance speeches of the night.

Ellen orders pizza. That’s pretty fuckin cool. The celebs are actually eating a lot of this za. She asks Harvey Weinstein to tip the delivery man.

I tune out thinking about the Raptors game and trying to figure out how the hell we beat Golden State. Big win for the #RTZ.

I have to go to sleep. I’m not even trying to stay up and considering I have a tattoo that says Carpe Noctem, that’s saying something. It’s mostly because I’m three epi’s shy of polishing off Season 2 of House of Cards and that reality is so much more interesting.

I’m super happy I chose to sleep instead of watching a fucking crime take place. Leo was robbed AGAIN of an Oscar. Hey babe, we all love you… you know this. Screw an Oscar.